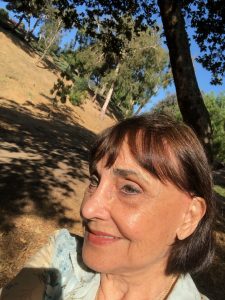 This blog is meant to invite readers of my works and to offer solidarity with first-generation immigrants, who’ve had the courage to uproot themselves and their families. It isn’t easy to turn your back on your past, your culture, your language. It takes courage, and fortitude, and lots of hope to step into the unknown. It isn’t something you can decide to do just like that. V.S. Naipul described it best in his novel A Bend in the River:

We have to learn to trample on the past . . . There may be some parts of the world—dead countries, or secure and by-passed ones—where men can cherish the past and think of passing on furniture and china to their heirs. Men can do that perhaps in Sweden or Canada. Some peasant department of France full of half-wits in chateaux; some crumbling Indian palace-city, or some dead colonial town in a hopeless South American country. Everywhere else men are in movement, the world is in movement, and the past can only cause pain.

And I, and indeed my entire family, have been in movement. From the former Yugoslavia, to Italy,  to America, to the Dominican Republic, and back to America. I come from a multicultural and multilingual family, and my works reflect that, even my fiction, as everything I write germinates from a personal experience, a story heard, someone I met, or a place I saw.

Travel stimulates creativity and opens the mind. The sounds, smells, colors and people I meet have a lasting effect on me. They throb in my blood and resonate in my memory. The walled in town as well as the sprawling population outside the fortress have a story that connects them. The autistic boy who hosed down the dock and discovered a rainbow in the water spray becomes The Rainbow Maker. The odors of a place live long in the memory as well as the palette of spices displayed on the stalls of outdoor vendors, and the people’s voices and more smells. They exist in a background of a history that forged the present story.

Reading has been influential in shaping the person and writer that I’ve become. Some of my most notable authors are listed below:

Bernard Shaw—He’s the reason that I studied dramatic literature. He has the uncanny gift of dialectics. Just when you believe a protagonist has made a good case for his opinion, the antagonist counters his view with equal conviction. His Major Barbara is a prime example.

Salman Rushdie—I find his Midnight’s Children a challenge to read. I keep going back to the same page for better understanding. In the end, the effort is well worth it. His writing is brilliant. You can hear the Indian accent jump out of the pages.

Walt Whitman—What can anyone say about the man who with his Leaves of Grass wrote the bible of democracy? Grass grows indiscriminately in cultivated gardens as well as in abandoned lots, over graves and in city parks, along the riverbanks and through cracked sidewalks. Grass is the symbol of democracy that Whitman celebrates along with man and woman, the artist and the philosopher, the farmer and the poet. Just think about these quotes: “The Female equally with the Male I sing”, “I exist as I am, that is enough”, and my favorite:

Neither a servant nor a master am I;

I take no sooner a large price than a small price—I will have my own, whoever enjoys me;

Life is a celebration in all its forms. Go ahead, read some of his poems. But beware, his optimism is addictive; you might catch yourself singing.

Now, voyager, sail thou forth, to seek and find.